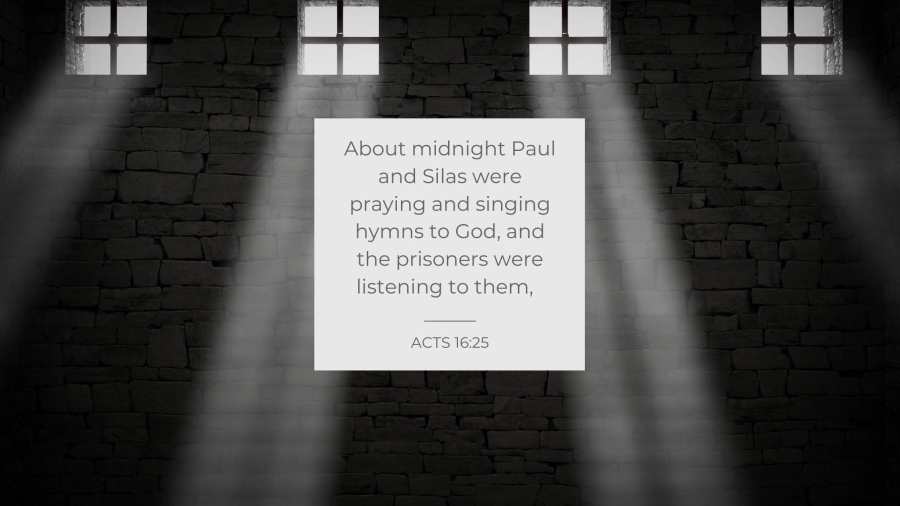 “About midnight Paul and Silas were praying and singing hymns to God, and the prisoners were listening to them,” (Acts 16:25)

What strikes me about the apostles is there rejoicing in the midst of persecution. Paul and Silas found themselves in prison for helping a poor innocent girl. She was being used and abused for profit by local business men. Possessed by a demon she was able to reveal the fortunes of others. They were content to allow her to continue in this state of darkness for their own gain. Paul and Silas were not. They exercised the demon, freeing her from bondage.

Once these men realized their cash cow was gone, they lied about and slandered Paul and Silas to the local authorities. They had them beaten and thrown into prison. Even though they were wounded and shackled in the inner prison, they prayed and sung hymns to the Lord. Not to themselves but openingly so that all the other prisoners could hear.

These are tough questions. Ones we won’t know the answer to until we are in the situation.

That, however, doesn’t mean we can’t prepare for the situation. I believe Paul, Silas, and others rejoiced in the Lord because they knew the Lord. They didn’t just know of Him, but they knew Him. Their relationship with Him was real and intimate. As well as they knew His character and His actions. They were theologians. We should be theologians as well.

No, you don’t need to go to seminary to be a theologian. Everyone is a theologian because everyone has an opinion about God, which means right now, no matter what degree you have or don’t have, you are a theologian.

The question is: Are you a responsible and accurate theologian?

If we are going to stand firm for Christ in the midst of persecution we must be responsible and accurate theologians because what we know about God will determine how we respond to difficult situations.