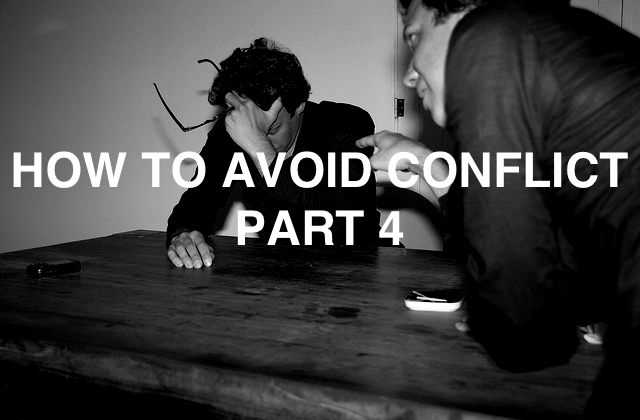 How Do We Avoid Conflict?

(4) Don’t speak evil against one another.

“Do not speak evil against one another, brothers. The one who speaks against a brother or judges his brother, speaks evil against the law and judges the law. But if you judge the law, you are not a doer of the law but a judge. There is only one lawgiver and judge, he who is able to save and to destroy. But who are you to judge your neighbor?” (Jas 4:11–12)

Speaking evil against another is harmful speech. Harmful speech could be anything from: Questioning legitimate authority, to slandering someone in secret, to bringing false accusations against them.

Conflict arises when we want recognition from others but someone else stands in our way. Our flesh tells us to remove the obstacle by criticizing and judging others.

Politicians are a great example. Debates, TV ads, and bill boards are all designed to defame their opponents and gain an advantage. From a worldly perspective it seems to work, but the result is conflict, which is what we want to avoid.

To keep conflict out of a community, we have to watch what we say. Harmful speech doesn’t build others up, it only tears them down, creating tension between you and them.

How do we keep ourselves from speaking evil against another?

What does James mean by judging another and the Law?

For James, judging others holds the idea of criticizing another with slanderous remarks, or pronouncing their damnation when we have no basis to do so.

We speak evil against or judge the Law when we slander or judge others because the Law demands we love our neighbors.

In other words, we observe what the Law says, – love your brother – think through it, and decide it is not worth following. When we do that, we are essentially saying the Law’s command is wrong, and is not worth anything.

Conflict occurs in a sinful world. It doesn’t have to occur in our churches though. James provides the necessary tools to keep conflict at bay. He tells us:

If you want to avoid conflict, take James’ ideas and apply them to your life.