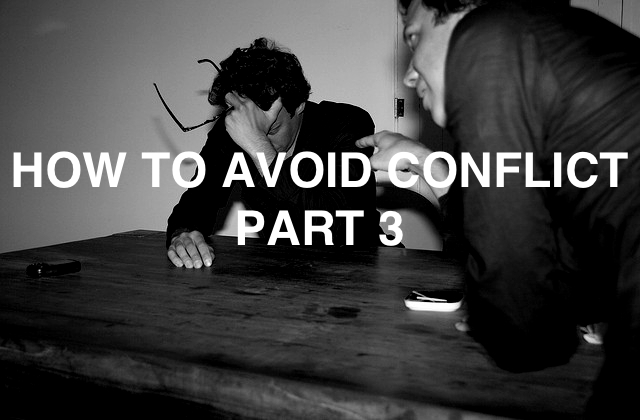 How Do We Avoid Conflict?

(3) Be a peacemaker by striving to be pure.

Those who are pure live opposite worldly wisdom. They live according to God’s Word: Peaceable, gentle, open to reason, full of mercy and good fruits, impartial and sincere.

“But the wisdom from above is first pure, then peaceable, gentle, open to reason, full of mercy and good fruits, impartial and sincere. And a harvest of righteousness is sown in peace by those who make peace.” (Jas 3:17–18)

The peaceable person avoids arguments or violent conflict. While those who are gentle are not harsh, but careful with others feelings.

Those open to reason don’t live by the motto “My way or the highway.” Instead they are willing to sit down and discuss with others, even yielding their will at times when a moral or unalterable theological principle is not involved.

While those full of mercy and good fruits don’t hold sins against another. They are forgiving. They have love for their neighbor and are generous in giving to others in need.

The impartial do not show partiality to one group over the other. While the sincere are not double-minded, but free from hypocrisy or playing a part, as well as they don’t hold to a double standard.

The pure are peacemakers, sowing peace in a community instead of conflict. So if you want peace, be a peacemaker instead of a peace breaker.

The next post in this series suggests we can avoid conflict by not speaking evil against one another.