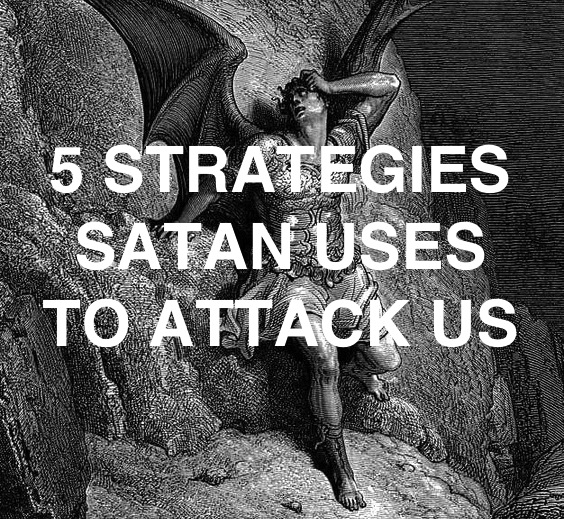 What are the strategies Satan uses to attack us? If we are fighting a spiritual war, we need to know his strategies. As Paul says,

(1) Temptation – Satan seeks to entice us to sin.

His purpose is to kill or hinder our witness through public scandal. To gain evidence that would allow him to accuse our conscience. To weaken our faith in sanctification in an area of our lives. To cause us to love our sin so we start excusing it or justifying it.

(2) Deception – Satan seeks to blind us to the truth and deceive us into thinking counterfeits are the real thing.

He tells us lies about God, the world, and ourselves, hoping we will believe them. He offers false teachers, promises, peace, joy, and happiness as a way to keep us from the biblical truth.

(3) Accusation – Satan seeks to keep us in conflict with the world and one another, as well as he works to get us to question our standing before God.

He causes unbelievers to accuse us of acts those on the fringes of Christianity do. He incites division among believers so they will accuse each other. As well as he uses our sins against us continually telling us we are not good enough to be a Christian.

(4) Possession – Satan seeks to put humans under the control of demons.

He causes individuals to be overtaken by demonic agents, who control their personality and provide them with supernatural gifts – healing and paranormal knowledge.

He causes demons to attack and oppress. He uses humans to persecute. He uses institutions, such as government to hinder the growth of Christianity.

Knowing the strategies Satan uses to attack us is helpful. Especially, in light of what Peter says,

Be sober-minded; be watchful. Your adversary the devil prowls around like a roaring lion, seeking someone to devour. Resist him, firm in your faith, knowing that the same kinds of suffering are being experienced by your brotherhood throughout the world. – 1 Peter 5:8-9

In order to be watchful and resist Him, we need to know his strategies.

Post adapted from Dynamics of Spiritual Life by Richard Lovelace, 137-40.

10 thoughts on “5 Strategies Satan Uses To Attack Us”