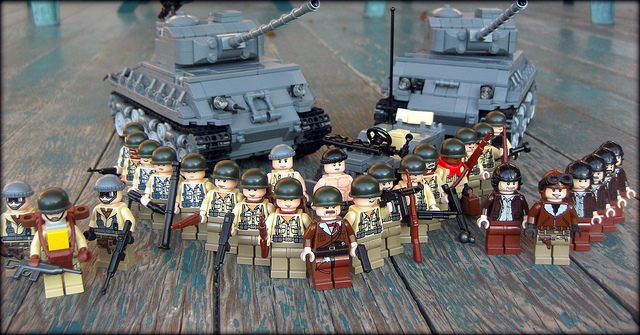 I am currently preaching through the book of 1 Corinthians. One thing I have noticed thus far is that the Corinthians were a messed up, unhealthy church. Idolatry, sexual immorality, worldly wisdom, and divisions are just a few of the things you find consuming them.

One of the first topics Paul deals with is divisions. The church had divided into personality factions.

Some in the church attached themselves to Paul, some to Apollos, others to Cephas (Peter), and still others to Christ. They each championed and bragged about their leader, even quarreling with one another at times over whose faction was superior.

As you could imagine, these factions killed church unity and damaged their ability to accomplish their mission — to make disciples.

The Corinthians aren’t the only church to divide. Churches divide today and for a number of reasons.

One story I heard started with the deacons deciding they didn’t like the Pastor. They thought he was trying to change the church too much. Instead of seeing the value in what he was doing, they sought to get rid of him.

When they told the pastor their desire, he decided it would be better to resign instead of fighting with the deacons and causing the church to divide over whether he should stay or not. In his mind, he thought it would lessen the controversy, but it didn’t. Instead it sparked one.

The next Sunday at church husband and wives, friends and relatives were divided against each other. Instead of having service, they had a church wide “discussion” that ended with two of the Deacon’s wives fighting each other at the front of the church.

(3) How church should be done

What I have in mind are “worship wars”. Let’s face it everyone has their musical preference. Some prefer a more traditional approach, others a contemporary one. Still others like a blend of each. Instead of seeing the value of all, a lot of folks will take a hard and fast line and divide.

(4) The Decorations in the Church

You would be amazed as to how many fights start over something as simple as the color of the carpet or the paint on the wall, or even the placement of a flower arrangement.

The Root Cause of Divisions

The above are just a few reasons churches divide, there are many more, but if we are going to find a solution, we need to know what is at the root of these divisions, so we can attack and kill it.

I believe our sinful desire for power, control, and praise are at the root of most church divisions. Think about it. Does the color of the carpet or walls really matter? As long as it’s not something that blinds you when you walk it, is it really something worth dividing over? Likewise, does it really matter where the flower arrangement is placed?

As well as people attach themselves to certain personalities because they like the status it affords them. People want to be able to say, “I follow Paul” so I must be better than you.

We all know divisions are damaging to the church and must be fixed. Let me offer 3 ways to fix divisions.

(1) Realize we are all on the same team, working toward the same goal.

At the end of verse 10 Paul tells the Corinthians his desire is for them to “be united in the same mind and the same judgment” (1 Cor. 1:10b).

When Paul says that, he doesn’t mean we are all to think the same exact way about everything. Instead, what he wants is for us to put aside our competitive spirit, realize we are on the same team, and be in one accord, so we can work toward the same goal — to make disciples. Church then shouldn’t be about our power, control, or praise. Instead it should be about Jesus.

(2) Remember our need for Jesus

Paul wants all of us to see we are sinners who need a Savior because we all have rebelled against God and deserve to be punished for our rebellion.

Realizing we are all sinners who need Jesus, should help us to see we all are in the same boat. That realization should humble us. It should kill our pride, and destroy anything inside of us that thinks we are better than another person.

(3) Realize we are all apart of the same family

Paul uses the term “brothers” over and over to drive home the point that we are all apart of the same family. Families are supposed to work together as one unit, caring for and loving one another, not dividing and devouring one another.

As believers in Christ, we should do everything we can to heal any divisions we may be experiencing. We should do that because we are all One in Christ and we should all be working toward the same goal — to make disciples and glorify Jesus.

So don’t divide against another. Instead work to heal any divisions you may be experiencing so we as a church can more effectively accomplish Jesus’ commission to us — to make disciples.

Post adapted from my sermon: A Church Divided and What to Do About It

4 thoughts on “What to Do About Divisions in the Church”