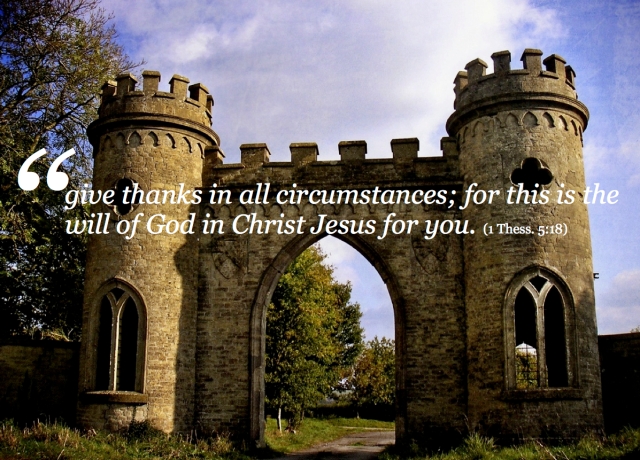 Do you thank God on a regular basis? When you do is it nominal or heartfelt? Do you see every circumstance as a reason to give thanks? Unthankfulness is common. So common we don’t really pay it much attention, which is why it is considered a respectable sin, and one we must deal with.

When I say someone is unthankful, I mean that they do not show appreciation for the things they have been given.

This is the attitude that Moses counseled against in Deuteronomy 8:11-14, 17-20. There he writes,

“Take care lest you forget the LORD your God by not keeping his commandments and his rules and his statutes, which I command you today, lest, when you have eaten and are full and have built good houses and live in them, and when your herds and flocks multiply and your silver and gold is multiplied and all that you have is multiplied, then your heart be lifted up, and you forget the LORD your God, who brought you out of the land of Egypt, out of the house of slavery…Beware lest you say in your heart, ‘My power and the might of my hand have gotten me this wealth.’ You shall remember the LORD your God, for it is he who gives you power to get wealth, that he may confirm his covenant that he swore to your fathers, as it is this day. And if you forget the LORD your God and go after other gods and serve them and worship them, I solemnly warn you today that you shall surely perish. Like the nations that the LORD makes to perish before you, so shall you perish, because you would not obey the voice of the LORD your God.

Moses explicitly tells the Israelites that they should not forget the Lord, who has given them everything. They were to remember:

This means that nothing is gained apart from the hand of the Lord, and we should thank Him for everything we have.

It Can Lead To

The sin of unthankfulness can lead to:

(1) DESTRUCTION – In the above passage, after reminding Israel of the works of the Lord, Moses makes it clear that those who do not remember the Lord’s provisions are prone to go after other gods, which will result in their destruction. So instead of forgetting the Lord, they are to remember Him.

We are to do the same:

We are to remember that everything we have, all our abilities and possessions, are the result of the Lord’s hand in our lives.

For we too are prone to chase after other gods, trusting in them, or even in our own selves, instead of the Lord, which will ultimately result in our destruction unless the Lord intervenes and saves us.

(2) MORAL DECLINE – In Romans 1:18-32, we are told that those who forget the Lord and do not give thanks to Him (vs 21) have their foolish hearts darkened and they are given over to the lusts in their hearts. The result is the heinous list of sins that follows in verses 26-31. Not only do these sins cause a lot of heartache and trouble, but they also ultimately result in destruction.

In my next post in this series, I will look at when we are to give thanks, and offer some Scripture to memorize to help with unthankfulness. Until then, reflect on the following questions.